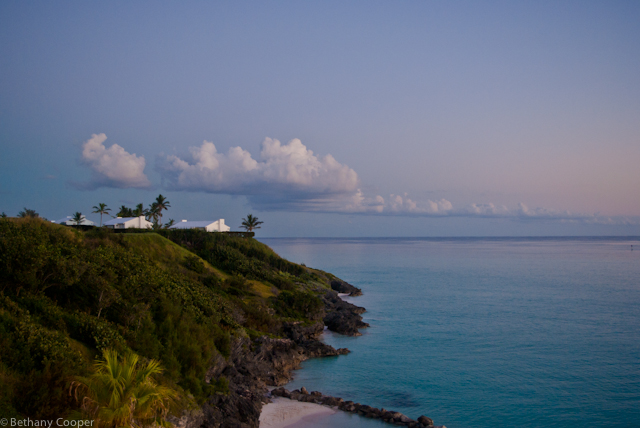 My mom has been on a 20 year mission, with the sole quest to convince me to visit her favorite vacation spot.  She was a military officer's wife, with passports full of exotic destinations, and a penchant for beaches, and therefore I am puzzled as to why I was not persuaded by her passion for this one small, easily accessible island, off the coast of the Carolinas, until now.  My mom has traveled to Bermuda seven times.  Her first trip was in the early 60s when she visited with a girlfriend.  A few years later, she switched her honeymoon to Bermuda from the originally planned Jamaica, at the last minute, due to political unrest and that was the beginning of my parents' joint love affair with the island.  They returned five more times together over the years. My dad adored the snorkeling and the freedom of the mopeds, while my mom enjoyed the beaches and the food.  I grew up with these stories and watched countless slide shows of their trips, but for some reason never had an urge to go, until my dad's illness and eventual death a year ago.  During that incredibly hard year, my mom and I promised ourselves that we would visit the island as a way to see some light at the end of the tunnel of illness.  That dream got us through some tough nights.  One year after my father's death, together, as promised we made the trip, and made memories that will stay with me for my lifetime. 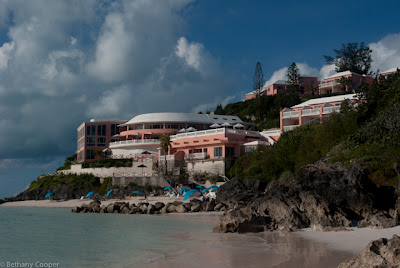 The beauty of Bermuda is all that my mother described, and more, as the colors of the ocean, flowers and houses cannot possibly be summed up in words or even in photography.  The colonial architecture is stunning and evokes a strong sense of time.  The people are hardworking and friendly with a beautiful blend of British and American cultures, yet coupled with a distinct island style.

We arrived at our destination, the Pompano Beach Club, a small 75 room, family owned, resort, on the south side of the island, in the parish of Southampton.  I had worked with one of the the owners years ago, back in New England, his American home base, but I had not stayed in touch and was stunned to see him greet us and remember me when we walked in the door to check-in.  Over the course of our week there, I came to learn that Tom Lamb and his brother Larry, are truly masterful hoteliers in the warmest, convivial sense of the word. 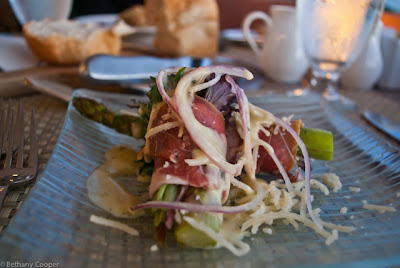 Situated directly on the water, the views from every angle of the resort, were magnificent.  We had the choice of 2 restaurants on-site or could take advantage of an exchange program with other resorts, but despite the options, each night we opted for the Cedar Room outdoor balcony where we could enjoy the fresh air and the deep colors of the sunset.  From this vantage point we could see the beach and even the wildlife in the crystal clear waters. One evening as the sun was setting in colors of pink and orange across the western sky, we saw a large sea turtle meandering past.   Another day we saw a school of gigantic, rainbow colored parrotfish swim by.  There is no other word more fitting than paradise. 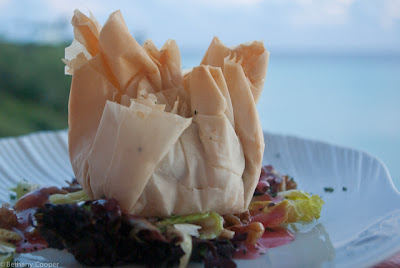 A critical component to my imagined paradise, is the food, and here it was superb and plentiful.  The nightly, changing, 5-course menu included many options, all of them creative and often celebrating local freshly caught fish.  Our seven days of gourmandizing included delectible first courses, such as the simple and elegant proscuitto wrapped asparagus, topped with onions, a little parmesan and drizzled lightly with a bearnaise sauce.  The asparagus spears were crisp, fresh and complimented by the salinity of the thinly shaved proscuitto.  Other memorable starters were the apple and brie parcel, served over a celery walnut salad with a raspberry dressing and the savory cheesecake over field greens. 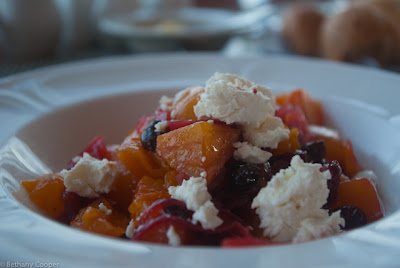 Each soup was better than the last, and as the nights were perfectly balmy, the type of temperature that is neither hot nor cold, I found myself repeatedly choosing the refreshing chilled options such as pear and champagne, creamy cucumber and dill, carrot and mango, and vichyssoise.  I often think of soup as comforting, and almost thrifty, as a way to use up extra ingredients, or nourishing and hearty as in a vietnamese pho, yet these chilled cousins were exactly the opposite.   They were chic and silky on the toungue, causing me to elegantly spoon small amounts in a forward motion, the way my father taught me in manners lessons, as a young child. 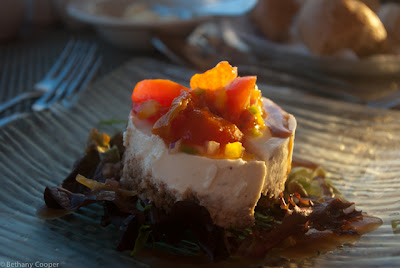 The salads were vivid, ranging from sweet beets chopped and served with creamy goat cheese to a bright caprese, with thick slices of tomato, fresh buffalo mozzarella and marinated onions. 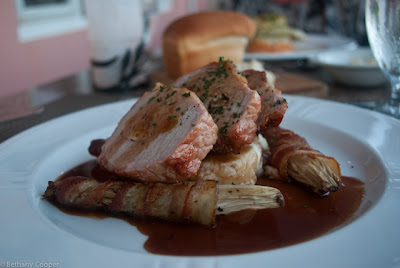 Over a half dozen new main course options each night, made choosing a dish both exciting and challenging.  Highlights included a tender roasted duck with sugar snap peas and whipped potatoes, delicately smothered in a Madeira jus; Tandoori spiced mahi mahi was fresh and spicy; tempura battered tiger shrimp were huge, sweet and juicy; the filet topped with a red Windsor (a British, red wine marbled, creamy, cheddar) crust, was fork-cutting tender; the seafood medley was chock full of shellfish served in a saffron cream base, with a puff pastry; an oven roasted pork loin was stuffed with brie and apricots served alongside bacon braised endive over a sherry jus; and the herb crusted rack of lamb with asparagus and whipped potatoes was savory and decadent, finished with a red current and thyme jus.

My mother has never met a dessert she didn't like and therefore made a point of sampling the everchanging menu.  Many of her selections were ice cream based, beautiful to the eye, and met her criteria of "sliding down easy" when we were already full to our limits. 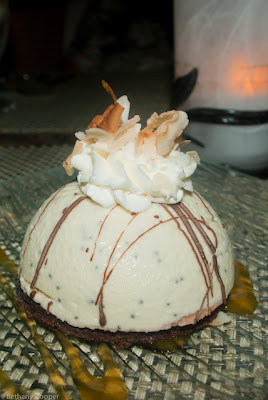 Clearly the food was sumptuous, however adding to that was a friendly staff who remembered our names every day, sought out the best spot on the balcony for our meals, remembered our beverage preferences, and made us feel like we were the only guests in the resort.  That strong family feel permeated all of our experiences.  The first Monday of our trip, Tom and his brother Larry hosted a  reception for the guests where they served hors deouvres and the national cocktail, a Rum Swizzle, which is a sweet concoction of Bermuda rum, pineapple, orange, and lime juices and grendadine.  While the staff helped out, Tom and Larry were ever present with pitchers, ensuring our swizzles did not run low.  At this event we met a business man who frequented Bermuda for his job with one of the big insurance agencies located there.   Early on in his career he stayed at the big, fancy resorts in Hamilton, but in recent years. he chose the Pompano because the owners know his name, they wait for him at the front desk if his plane is late, they drive him to the commuter ferry each morning and pick him up upon his return, and when you travel frequently for business, these little family style nuances are important. It doesn't hurt that he is a big snorkeler and the Pompano is one of the few resorts on the island with a private beach, loaded with stunning fish. 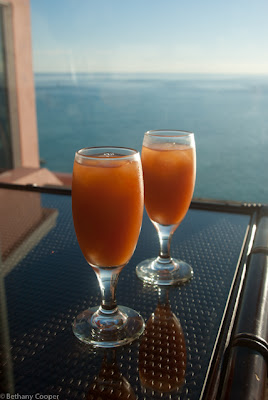 In addition to the great shopping and lazy days at the beach, my mother and I also took advantage of the snorkeling, booking an excursion our last day on the island.  She had previously snorkeled with my father, who was an avid swimmer and she was determined for me to see the underwater sights.  Eight other guests joined us on the  trip organized through the resort with Captain Demian Tucker of Exclusive Charters BDA.  It was a rough, but sunny day and Demian wisely took us to a shallow location to start, where we could hug the coral caves along the shore and see amazing fish, but also still touch bottom.  My mother does not swim and while she is in amazing shape for a septegenarian, who managed to rock a pair of Mickey Mouse arm swimmies, you can imagine my level of trepidation over supporting her, but fortunately this was the perfect venue. We held hands, swimming along the coast, pointing excitedly to the schools of colorful fish, in what turned out to be a wonderful mother/daughter bonding experience.  Next, Demien took us 2 miles offshore, anchored the boat in twenty-one feet of aquamarine water on the edge of a twelve foot reef.  The wind was up, the swells were rolling, and there was not another boat in sight. I am a strong swimmer, or I was back in my childhood, but like many of the folks on the boat, I was a bit hesitant.  Wisely Demian did not let my mother join me, but instead poured her Rum Swizzle and made her comfortable.  I jumped into the swells and after a quick initial second of panic, I realized it looked far rougher than it felt actually swimming in it.  I glided over the edge of the reef, comforted by my own Darth Vader-like breathing, and was immediately transported into another world.  Here brain coral and fan coral came in all colors and provided habitat for a diverse mix of multi-colored fish, most not fearful at all of our presence.   I was transfixed and as I reflect back, I believe that is as close as I have come in recent years to a state of flow, a mental state, attributed to Mihály Csíkszentmihályi, where essentially one is fully immersed in an activity so focused and full of enjoyment that time passes faster than you thought possible.  The combination of the silence of the water, the beauty of the sea world, and the physical activity involved, temporarily shut out any of my angst and filled me with exquisite joy, which after all, is the purpose of a vacation. 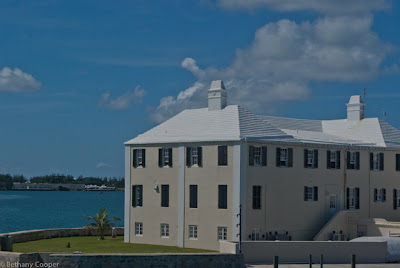 There is something shiveringly special about visiting this island of paradise, home to so many of my parents' most pleasurable vacation memories, with my mother at my side.  I can now envision the beaches where they sunned and swam.  I saw the bridge near St. Georges where they infamously raced mopeds.  I walked the streets of Hamilton where they shopped together.  I saw the restaurants where they dressed-up for formal dinners.  The grainy slides of my young, starry-eyed parents, have come to life in a sharply romantic way.  I also understand the magic of the island that kept them returning year after year, and why no other tropical destination ever held a candle to Bermuda.  My mother and I have made another promise to each other, we have created our very own tradition, one captured on Facebook instead of slides, yet also poignant, we will together return in just a few years to celebrate her 75th birthday with rum swizzles and mouth watering five-course meals.  We hope Tom and Larry remember us! 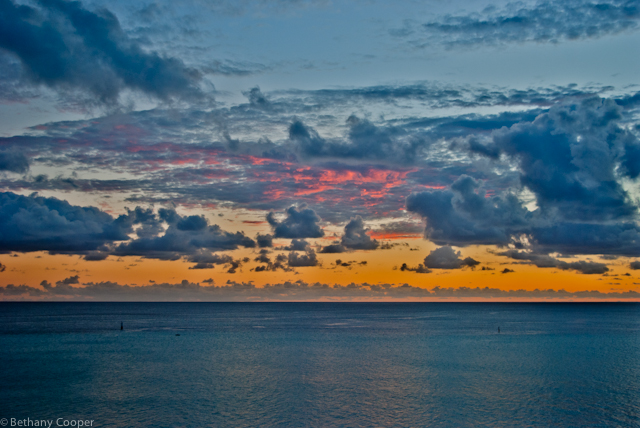